Reading out of my comfort zone part II: Life Writings

Posted on December 3, 2015 by shoshibookblog 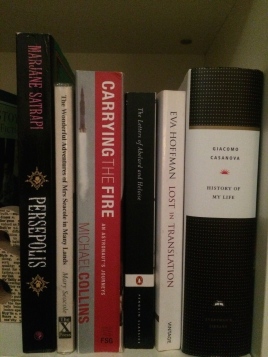 I’ve been loving my year of Russian reading, but I realise that this has meant other books have had to wait for quite a while to get noticed.  As 2016 approaches, I’m lining up some new volumes to tackle and this time I’ve decided to branch out, slightly.

Rather than just novels, I’m aware that I have a lot of non-fiction that does genuinely appeal, despite being far from my usual reading.  When grouped together, they form a really attractive book list, made of biographies and letters, spanning the globe (and beyond).

In no particular order I’m really looking forward to:

People have been recommending that I try out ‘Persepolis’ for ages now, usually right after I say something clichéed like “I don’t usually read graphic novels, but I really like ‘Maus'”.  By all accounts, this powerfully illustrated autobiography is a must read.  It charts the experiences of Satrapi, first as a child in Iran and then as a teenager in Austria.  I’ve already been won over by the first chapter, ‘The Veil,’ in which the 10 year old Satrapi brings brilliant humour and depth to her depiction of a girls’ school in 1980s Iran. (It shouldn’t have taken me so long to get round to this one, I reviewed it in March and you can read the post here).

I was incredibly excited to pick up ‘The Wonderful Adventures of Mrs Seacole in Many Lands’ at a library book sale a couple of weeks ago.  Seacole is generally remembered as a contrast to the white, privileged Florence Nightingale.  She also cared for British casualties during the Crimean war; unlike Nightingale however, she worked with the soldiers, not the bureaucracy.  She went on to become a beloved and revered figure in British society.  The above is what I know, but I can’t wait to find out more, and written in her own words, in this 1857 classic.  (I reviewed this in April as ‘The Best Biography So Far‘)

I can’t help feeling I’m not the target audience for this one.  I know very little about science in general and the space missions in particular.  Still, I couldn’t help but notice the number of astronaut autobiographies that have come out in recent years.  In keeping with the retro tone of my usual reading, I’m going for this 1974 biography.  It was sold to me as ‘the  most candid of all the Apollo biographies’ and I’ve been promised a fascinating mixture of genuine emotion, behind the scenes drama and technical insight.  (This was my February non-fiction read, you can see my full review here).

I first learned of this medieval couple through Flanders and Swann: ”Who’s Abelard?’ said Heloise / He’s not my fella / He’s a friend, just a friend.’  While I’m sure the actual letters themselves are less flippant, there is something wonderfully appealing and Gothic about reading the translations of the very lines written by the philosopher monk and his female pupil.  Their romance included an illegitimate child followed by a secret marriage, an escape to a nunnery and a castration.  Now I just need to see how many of these shocking events are mentioned in the letters themselves!
(The answer is: all of them.  See my full review here)

This is probably going to be the first of the list that I’ll actually read, because I need to have finished it for book-club at the end of December.  It ticks all of my literary boxes, not only for the wonderful title, but for its promise of a book imbued with a love of language.  On page two, Hoffman describes leaving Cracow: ‘I am suffering my first, severe attack of nostalgia, or tęsknota– a word that adds to nostalgia the tonalities of sadness and longing.’   I already want to know more about her experiences and about how these tie in to the very language with which she can describe them. (It was the first – and you can read the review here).

This doorstopper of a volume is actually the abridged memoir of the famous Venetian.  Still, over 1000 pages seems like a good place to start at getting to know this most famous seducer.  It’s going to be an action-packed ride through eighteenth century society; along with his sexual conquests, Casanova also travelled around Europe, meeting the most public of figures, including Catherine the Great and Rousseau.  After reading the breathless blurb it’s no longer a wonder to me that this memoir is quite so long, in fact, I’ll be interested to see how everything can possibly be squeezed in! (See full review here).

Lest this collection look a little European/Western tradition heavy, I’m also going to include Jung Chang’s ‘Wild Swans’ which has been on my Kindle all year and on my reading list for far longer.  Spanning a century, this epic family biography tells China’s history through the lives of three women.  Like the best biographies, it will teach me about people, about cultures and about different ways of seeing the world. (See my full and very enthusiastic review here) 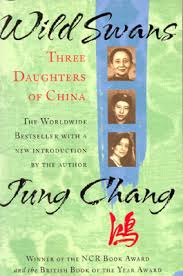 I don’t usually read non-fiction, which explains why these books have stacked up so much, but the pile suddenly seems less daunting and more like the best kind of reading fun.  I’ll be looking out for encouragement with this off-my-beaten-track reading, and also more recommendations, what great life-writings have I missed off and which of the list do you think I should be prioritising?

Like Loading...
This entry was posted in Biography, Book Lists and tagged Biography, Carrying the Fire, Casanova, Eva Hoffman, Letters of Abelard and Heloïse, life writings, Lost in Translation, Michael Collins, Persepolis, Satrapi, The Wonderful Adventures of Mrs Seacole in Many Lands. Bookmark the permalink.

29 Responses to Reading out of my comfort zone part II: Life Writings