Posted on January 26, 2016 by shoshibookblog 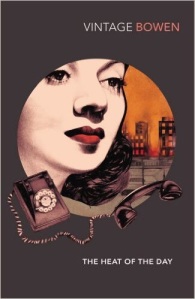 I recently read ‘The Heat of the Day‘, which is  great book with a great title, but I can’t help thinking that the two don’t really match up.  Frankly, most of the memorable events take place at night and much is made of black-out curtains throughout.  And then there’s the fact that the novel begins at the end of summer and that’s about as warm as it gets.  Even the passion suggested by ‘heat’ is subverted by the clinical deceptions that sustain the plot.  It all got me thinking about the great ironic book titles that I’ve enjoyed over the years and now seems like the perfect time to collate the best of them:

Most recently, Marlon James won the Booker after proving that there is nothing brief about trying to unpick history or, indeed, killings.  The dark humour of the title only becomes more explicit as you get further into the book.  At the start, you might think it’s linked to the attempted assassination on Bob Marley and possibly the violence that precedes the attack.  For most of the novel, I thought it referred to the fate of his would-be killers.  It is equally applicable to a collection of deaths that occur decades later, in a different country.  ‘A Brief History of Seven Killings’ is a wonderful doorstop of a novel, that uses a great title to expose the simplified view of sensational events so prevalent in modern journalism and popular history. (You can see my full, enthusiastic, review here)

As this Penguin cover shows, there is nothing funny about Wharton’s ‘House of Mirth.’  In fairness, it all seems less ironic when you know that the title is actually a quotation from the incredibly depressing biblical book of Ecclesiastes: ‘The heart of the wise is in the house of mourning; but the heart of fools is in the house of mirth.’ I’m sure the reference would have been well known to Wharton’s contemporaries, but fear not, it doesn’t take many pages before even the most secular of readers will pick up on the inevitable misery and downward trajectory of our heroine, Lily Barth.  When I first attempted this book, I was unable to finish because it was increasingly clear quite how miserable the tragic conclusion would be.  I now rate it as one of Wharton’s best, and recommend it to everyone – just don’t expect too much of the plot to take place in happy houses…

Les Rougon-Macquart cycle is not known for its uplifting story-lines, but even amongst the madness, misery and sadism of the twenty-novel series, ‘La Joie de Vivre’ stands out as the most depressing.  The orphaned Pauline Quenue (a girl who enjoys life so much in the considerably more cheerful ‘Venre de Paris’) has come to live with her miserable and neurotic paternal relations.  You can’t help feeling she’d do better with her mother’s family, poverty-stricken lunatics and murderers that they are.  Instead she is the futile ray of human decency in a stifling pit of middle-class melancholy.  Oh, and if you’re interested in literature and medicine this novel also contains the best nineteenth-century description of OCD that I’ve ever read.  There’s lots of illness, lots of emotional abuse and lots and lots of misery.  If ever a book needs the words ‘ironically titled’ on the blurb, ‘La Joie de Vivre’ does.

‘All Quiet on the Western Front’ is one of the all time great anti-war novels.  Also, unlike the rather jarring translations sometimes inflicted on foreign language titles (see the cover of ‘La Joie de Vivre’ above), I feel the English version of the German ‘Im Westen Nichts Neues‘, ‘In the West, Nothing New’, does capture the stagnation and the callous glibness of the original.  After all, it is quiet and there is no European or world significance in the fact that a small group of men fight and die over tiny patches of land.  It’s ironic that while reading, sympathising with and loving the main characters, we are continually faced with their ‘nothingness’, the ‘quiet’ passivity of their turbulent lives.   The fact that the book is so successful in translation is a testimony to the truth of its story; no matter what side of the battlefield readers hail from, they will identify with the plight of the everyman soldier.  World War I has been the source of many angry and satirical texts (take the English ‘Oh, What a Lovely War’), but nothing can touch the splendour and humanity of Remarque’s classic.

This Czech classic claims to be about a ‘Good soldier’, rather than about the most battle-shy maverick to exist in military fiction.  Švejk is a soldier and a master at passive resistance.  My edition of this novel has a map that traces his, apparently sincere, journey to try to rejoin his regiment.  Of course, he can’t fight until he finds them and it is incredible how many incidents somehow prevent him from putting his life in danger.  Whether Šveijk’s incompetence is feigned or genuine, his success in baffling all levels of army bureaucracy goes beyond Blackadder’s wildest dreams.  A welcome change from the misery of the preceding titles, ‘The Good Solder Švejk’ is laugh out loud funny.  Highly recommended, just remember not to take the title too seriously!

Not to be confused with the above, Ford’s masterful novel has no interest in military matters and nothing in it, starting with the eponymous officer, is quite as it seems.  Although the bumbling, deluded and highly unreliable narrator admires, even idolises, captain Edward Ashburnham, the reader is encouraged to reach their own conclusions about this romantic remnant of the British empire.  Living a parasitic life of leisure in the pleasure resorts of Europe, Ashburnham is as far from a war hero as it is possible to get.  If you want someone who gets sucked into affairs of the heart on the other hand … I won’t give away the wonderfully twisted story-line, but I will recommend ‘The Good Soldier’ to anyone who wants to enjoy a bitingly satirical take on the tradition of the honourable British gentleman.

My last title in this military theme has to be Lermontov’s Russian classic, ‘A Hero of Our Time.’  This was one of my top re-reads from my Russian literature project last year and the power of the book really all stems from the irony of the title.  Pechorin, the protagonist, is utterly repugnant.  His arrogance leads to popularity, but his diaries reveal levels of cynicism and manipulation to rival Valmont or Rochester.  Cold-hearted and selfish, he is a fierce indictment of Lermontov’s society. For readers today, he helps put War and Peace’s Dolokhov into perspective and is still a lesson about getting caught up with the romance of the Byron hero without pausing to reflect on the cruelty that is always part of such a character. (You can read my more detailed thoughts on this novel from when I read it at the start of my 2015 Russian reading project here)

Clearly, ironic book titles are hard to get right.  I’ve been racking my brains and this short list is really all I could come up with.  On the other hand, every single one of the novels above is a winner and a world classic in the bargain.  Let me know what I’ve missed out, and happy reading!