Fictional Biography at its Finest: ‘The Noise of Time,’ by Julian Barnes (2016)

Posted on February 9, 2016 by shoshibookblog 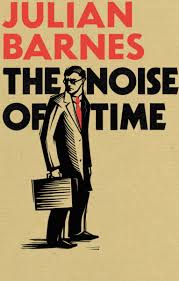 The first Barnes novel I ever read was the charmingly idiosyncratic ‘Flaubert’s Parrot’, a delightfully unreliable biography of the French novelist.  When I learned that ‘The Noise of Time’ was a new fictional biography, this time of the Soviet composer Shostakovich, I was both intrigued and concerned.  Shostakovich survived Stalin’s rule, was periodically hauled out to pose as a model Soviet composer and lived under fear of death and torture for much of his life.  He also publicly extolled the virtues of Stalin’s regime, signed letters denouncing numerous artists and became a party member under Khrushchev.  His life and times go far beyond the intellectual and neurotic games of ‘Flaubert’s Parrot’; was Barnes going to succeed in bringing his post-modern playfulness to such an anachronistic topic?

The answer is, in general, no, not because the book doesn’t succeed, but because it doesn’t make the attempt.  Barnes may find it hard to eschew irony, but he can write without playfulness when such a tone becomes inappropriate.  Rather than an intellectual exploration of ‘life versus art’, this biography is a study in compromise, integrity and fear.  Dealing with three successive ‘worst moments’ in Shostakovich’s life it explores the complexity around trying to understand an individual when no one lives in isolation and a person’s priorities change as insidiously as the politics around them.

‘The Noise of Time’ begins with prosaic, inartistic fear as Shostakovich plans to spend the night outside the lift in his apartment.  He is waiting to be arrested following Stalin’s uncomplimentary review of his opera ‘Lady Macbeth of the Mtsensk District’.  Because it seems less undignified to be standing with a suitcase ready, he is determined that the KGB won’t find him napping.  He knows any arrest will take place at night, but at least he can try to bring some dignity to the end of his career and the probable end to his life.  This isn’t a book that takes pleasure in suspense, and I don’t want to ruin what surprises there may be for readers not already familiar with Shostakovich’s life.  You’ll have to read the novel (or Wikipedia) to learn the next two significant events events it depicts.  As you may expect however, the events are less significant than the emotions they create.  A passive participant in his own life, Shostakovich is presented as both a success and a failure, a survivor and a pitiful victim of Soviet tyranny.

This is a well-judged and extremely thoughtful book, which makes my initial concerns seem rather insulting.  There is no inappropriate humour and no easy answers are given to the complex issues raised.  Does it stand up to ‘Flaubert’s Parrot’ (my personal favourite Barnes novel, even if ‘The Sense of an Ending’ beat it to the Booker prize)?  Personally, I’m not sure the framing device works quite as well as the stuffed bird of the earlier novel.  On the other hand, the tightness of the three part structure is powerful and poignant, using repetition to evoke loss, the fluidity of fact and the futility of attempting to impose order on the mess of human existence.  Certainly, ‘The Noise of Time’ is already being tipped for major prizes this year and, if it wins, the achievement won’t have the tainted feel of the honour awarded its protagonist.  A book to read if you like Soviet history, Barnes’ writing style or any book that isn’t afraid to grapple with issues of truth, authenticity and art without resorting to easy or trite answers.

2. ‘Flush’ by Virginia Woolf (1933).  A biography of Elizabeth Barrett Browning’s pet cocker spaniel.  Also contains relevant facts about the poet’s own life and times.  Every bit as strange and wonderful as this description suggests.

3. ‘The Master’ by Colm Tóibín (2004).  A novel depicting the later years of Henry James’ life.  It’s an excellent introduction for those who haven’t discovered James for themselves, and also a lovely treat for readers familiar with his work.  This was one of the first books I wrote about on this blog and you can see my review of it here.

4. ‘Us Conductors’ by Sean Michaels (2014).  I still haven’t read this book, but I really want to.  It tells the life of Lev Termin, the inventor of the theremin.  I suspect it would make a wonderfully incongruous pairing with ‘The Noise of Time’, following a very different musical career from twentieth-century Russia.  You can read glowing reviews of it at Consumed by Ink  and Lady Fancifull’s blog.

5. ‘Winter’ by Christopher Nicholson (2014).  This is another book that I haven’t read yet, but it sounds great.  The novel deals with the last years of Thomas Hardy’s life and shows him getting the very most out of his old age.  My thanks to The Book Binder’s Daughter for making me aware of this book, you can read her review of it here.

I received my copy of ‘The Noise of Time’ from the publisher via Netgalley, in exchange for an honest review.

17 Responses to Fictional Biography at its Finest: ‘The Noise of Time,’ by Julian Barnes (2016)