Posted on February 23, 2016 by shoshibookblog

Out of sequence, but well worth waiting for, I’ve finally read the first title of my diverse reading A-Z (devised as a response to #DiverseDecember in 2015).  At the time, it had felt almost like a cheat, after all, it might seem like Adichie doesn’t suffer from a lack of publicity or recognition.  Her second novel ‘Half of a Yellow Sun’ was recently voted the ‘best of the best’, the best winner of the woman’s prize for fiction (first Orange, now Baileys) from the last decade.  Her debut, ‘Purple Hibiscus,’ won two Commonwealth Writers’ Prizes for best first novel (from Africa, and overall).  On the other hand, I made the list so I make the rules and I’ve been meaning to read ‘Americanah’ since its publication three years ago.

The novel follows a pair of Nigerian sweethearts and its title relates to the obsession with America felt by the boy and experienced by the girl.  Both are Nigerian, but Obinze is driven, ‘he had never simply wanted to go abroad, as many others did … It had always been America, only America.  A longing nurtured and nursed over many years.‘  It is ironic therefore that it is Ifemelu who has made her home in the fabled land of opportunity.  She’s settled in Princeton, has a first-world job (writing a blog – the dream lives on) and has lived away from home for fifteen years.  She and Obinze haven’t corresponded in over a decade, but presumably they will meet again as she is selling her condo and ending her American life in order to move back to Lagos.  Flashing back and forwards, ‘Americanah’ charts the progression and abrupt break in their relationship; this is engaging and entertaining, but doesn’t contain all the Adichie stamp of brilliance.  That comes from the detailed exploration of race and identity in the USA, the UK and ‘back home,’ in Nigeria.

Amongst the best passages in the novel are Ifemelu’s writings about race. Her blog is called ‘Raceteenth or Various Observations About American Blacks (Those Formerly Known as Negroes)‘.  It is superb.  By this I mean that in the world of the novel it is rightfully lauded and is able to support Ifemelu in her comfortable and aspirational lifestyle, but the genius lies in how it also touches the book’s readers; when blog posts are ‘quoted’ they are consistently interesting, engaging and challenging.  It says much for the standard of the characterisation and plot that I was able to enjoy following the story even though it interrupted my reading of the posts.  Ifemelu writes as well as Chimamanda Ngozi Adichie, which really says something for the quality of her critique of American society.  Take one briefly quoted post: ‘Job Vacancy in America – National Arbiter in Chief of “Who is Racist”‘.  It begins by explaining ‘In America, racism exists but all racists are gone.  Racists belong to the past … ‘  It’s a different form but many points raised in the blog reminded me strongly of Rankine’s masterful book ‘Citizen’ (reviewed here).  Although Adichie presents an outsider’s view of the US, her conclusions seem depressingly similar, and are written with equal fervour and conviction.

Of course, ‘Americanah’ is more than just the blog.  It is also a coming of age story and a modern romance.  In Adichie’s previous novels, relationships tend to be tainted by violence (national violence in ‘Half of a Yellow Sun’ and domestic abuse in ‘Purple Hibiscus’).  Reading this third novel made me hope that Adichie would go for a Khaled Hosseini-style twist for the hat-trick; after the unspeakable violence of ‘The Kite Runner’ and ‘A Thousand Splendid Suns’ his most recent book, ‘And the Mountains Echoed,’ also featured characters leaving their homeland for America.  This may not be related, but it was by far the least bleak of any of his novels.   I hope it’s not a spoiler to let you know that, although far from fluffy, ‘Americanah’ is the least physically brutal of Adichie’s novels.  As a squeamish reader, I suspect it is also the book of hers I am most likely to re-read, I’ll certainly be returning to the blog extracts if only to see just how good such writing can be.

I really enjoyed ‘Americanah.’  The characters and story were engaging and the commentary on race is superb.  High on my list for future reading is ‘The Thing Around Your Neck’, Adichie’s 2009 short story collection.  I’ve seen how accomplished her novels are, and I can’t wait to see how she adapted her style to a new form.  If you want an example of her excellent non-fiction, then check out the americanahblog.  For a few months in 2014, Adichie brought Ifemelu’s blog to life, this time writing about her life in Nigeria.  It’s well worth a visit and is further evidence for Adichie’s position as one of the great English language authors of our age.  I recommend all of her novels, though I think this most recent will have a special place in hearts of all of us who love to read and write online… 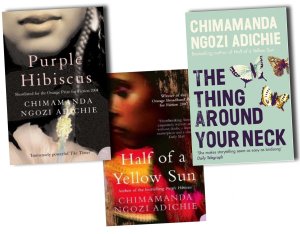