Posted on March 1, 2016 by shoshibookblog 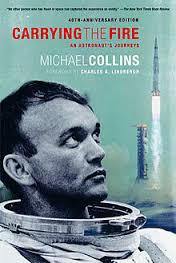 I was very proud of myself for reading Michael Collins’ memoir of his astronaut experiences.  I probably shouldn’t have been, but I read so little non-fiction, know so little about the space programme, and am so unlikely to pick up the biography of a 20th century white male celebrity that it really felt like something of an achievement.  To clarify, the pride didn’t come from my reading the book (after all, I’ll read anything), it came from enjoying it.

Michael Collins is an extremely appealing narrator of his own life.  Diffident and self-depreciating, I knew I was on to a winner when he described his peers at the USAF Experimental Flight Test Pilot School ‘mostly hyperthyroid, superachieving first sons of superachievers.’  Michael Collins, of course, was the first man not to walk on the moon.  He was the Command Module Pilot on Apollo 11.  This means that he orbited the moon while Armstrong and Aldrin were busy making history.  Reading his memoir makes you feel he was the perfect man for the job.  Collins never did walk on the moon; he left NASA after Apollo 11 and appears to have no regrets.  There is no sense of being ‘so near and yet so far’, no sense of having missed out on a unique opportunity.  Instead Collins shows quiet pride in his work and presents himself as being as close to an everyman-astronaut as it’s possible to be.

The greatest achievement of the memoir (besides making the mechanics of space flight almost comprehensible) is that, by the end of it, you understand Collins’ attitude to his role on Apollo 11 and his life as an astronaut in general.  The moon expedition, after all, was his second space flight and actually contained less excitement than his first, on Gemini 10.  Despite the self-depreciating tone (see above) Collins is supremely able to tell a compelling story, combining scientific information and personal detail with impressive skill.  It’s a difficult job, especially as Collins appears to be a test pilot by vocation, that is, someone who is able to take extreme danger and challenge in his stride, without getting too worked up about it.  An irony evident throughout the book is that those most suited to space adventure are just those who will be able to remain as emotionally unaffected as possible.  It’s no good having an astronaut who gets so caught up in the moment they forget the hundreds of procedures they have memorised.  It also seems to be a requirement that these most famous icons from the last century will be retiring men, who would rather sit in a simulator or escape into a plane than talk to the press.  Collins’ restrained personality shows through his prose, he’s an agreeable companion for the duration of the book, but he doesn’t give the impression of wanting to become the reader’s best friend.

I recommend this book to anyone who wants to learn more about NASA’s space programme or who wants to read an engaging memoir of a quiet celebrity of the 20th century.  Also, if you’re taking part in any Reading The World challenges … how about a trip to the moon to give your 2016 reading an added boost?  You won’t be disappointed.