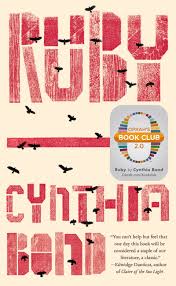 The cover and title of this book don’t give much away.  Then the first sentence starts to hint at epic American legends, ‘Ruby Bell was a constant reminder of what could befall a woman whose shoe heels were too high.  The people of Liberty Township wove her into cautionary tales of the wages of sin and travel … She wore gray like rain clouds and wandered the red roads in bared feet.’  It’s easy to get drawn into an all-white American dream of courage, friendship and homecoming.  Bond’s story however, though equally imbued with evil villains and magical forces, presents a much more terrifying flip slide of the American dream. 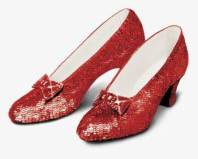 When we first meet Ruby, she is ‘buck-crazy.  Howling, half-naked mad.’  Stared at and judged by the established citizens of Liberty Township, she seems to have utterly escaped from all societal constraints and conventions.  Only one man views her with sympathy, seeing the beautiful child within the adult wreck.

The question throughout the novel is whether Ephram Jennings’ unselfish love for Ruby is going to be enough to save her from her current torturous existence.  Things aren’t hopeful, as Ephram has already failed once at such a task; his mother ended her days in an asylum after literally running mad at a community picnic. Dominated by his overbearingly righteous sister, Jennings seems like a highly unlikely hero, but then he has picked for himself an incredibly difficult heroine.

Ruby’s exceptional beauty would seem to mark her out for a charmed life.  As a black woman however, the product of rape and brutality, her looks are only a liability.  Her childhood spent as a sex worker, her ‘escape’ to the seedy permissiveness of New York and her utterly vulnerable fragility on her return home all put her at the mercy of, well, everyone.  White men, black men, white women and black women are all in a position to use and abuse her, each one bolstered by the knowledge that their actions are somehow justified by Ruby’s face, figure and skin.

Underlying the whole novel is the question of evil.  Free floating or physically embodied, evil literally stalks Liberty Township.  It’s not hard to see why, the blood-soaked soil and the legacy of inhumanity has no comforting historical distance, it’s a living memory for every inhabitant.  Working within a Magical Realism tradition that I generally associate with Toni Morrison, Bond is able to show us the young children with nooses round their necks, the murdered and mutilated babies who cluster around Ruby, coming alive in her heart, her womb and her arms.  While Ruby’s suffering is essentially focussed inwards (she is eventually so distant from her physical reality that rape scenes later on in the novel see her floating into the landscape, removed from the immediate pain and degradation), other members of the community find themselves perpetuating the violence they experience.  There are no passive victims in the novel, and one of its most impressive strengths is the complex presentation of institutionalised cruelty.

‘Ruby’ is definitely one of my personal favourites from this year’s Bailey’s shortlist. At its heart is a traditional fairy tale, but Bond never shies away from the terror that lies at the core of this genre.  It is not an easy read (for anyone working their way through the shortlist, I really recommend taking some kind of break rather than reading this and ‘A Little Life’ back to back), but it is a book that I highly recommend to everyone.  An important function of literature is to create discussion, open up new perspectives on the past and confront expectations.  The best challenging fiction will also force a reader to confront difficult issues, while remaining accessible enough to prevent complete alienation.  ‘Ruby,’ achieves all of the above, and I am so pleased that the Bailey’s shortlist actually got me to open up a wonderful book that otherwise could easily have passed me by.

I received my copy of ‘Ruby’ from the publisher via Netgalley, in exchange for an honest review.