It’s not what you say, it’s the way that you say it.

Much as I’m a massive fan of literature in translation, there are certain reading joys that only really come with understanding the precise nuances of the author’s chosen language.  The moment when I realised that my reading would only ever be mono-lingual was when I first got into Zola’s Rougon-Macquart novel cycle.  The introduction of my copy of ‘L’assommoir‘ made it very clear that the original prose was so packed with meticulously researched period Parisian slang that even its contemporary French audience found it hard to understand.  It was clear I’d have no chance with my pocket English-French dictionary and I happily resigned myself to the translation.  Let’s be honest, even if I was to learn the required vocabulary, I don’t see how I’d ever get to grips with the infinite connotations of a language that drew on centuries of rich written and oral traditions.  It seemed better to stick with what I knew.

This is especially convincing as, when it comes to English language fiction, the options are varied and exciting.  Having just reviewed Marlon James’s second novel, ‘The Book of Night Women,’ and having committed myself to reading more diversely, this feels like a good time to celebrate my top non-Standard English authors.  These aren’t writers who just have their characters speak in quaint or comedy accents shown by mis-spelled words (as if Standard English pronunciation was in any way phonetic). Instead, they’re writers who adapt written language with such skill they make all readers question their assumptions about who owns language and who ultimately has control over the basics of communication.

With my increased focus on diverse reading this year, I’ve been thinking quite a bit about how writing non-Standard English, when done well, is an incredibly powerful way of both alienating readers and inviting them to see the world from a different viewpoint.  For the record, here are the writers I consider masters of the art.  I’m hoping to discover more as I continue to look out for those ambitious authors who seek to show that the stories themselves aren’t everything; to really understand a different world-view, you also need to pay attention to how such stories are told.

It was Marlon James who got me thinking about this topic, because his lyrical prose in ‘The Book of Night Women,’ and his sublime use of non-Standard English in ‘A Brief History of Seven Killings,’ mark him down as one of the best  contemporary writers exploring non-Standard English in fiction.  It’s not as simple as James writing the way people talk, it’s the way he creates convincing interior monologues.  These hypnotic narratives show his characters can use words musically and forcefully, even if their vocabulary is stinted by lack of education and their grammar created through an oral rather than a standard literary education.  Words are not misspelled, to do so would be to bring an outside consciousness to bear on a voice that lacks a knowledge of such rules.  We’re told explicitly ‘boys like me getting older and not in school regular and can’t read Dick and Jane but know Coca-Cola, and want to go to a studio and cut a tune and sing hit songs and ride the riddim out of the ghetto but Copenhagen City and the Eight Lanes both too big and every time you reach the edge, the edge move ahead of you like a shadow and the whole world is a ghetto, and you wait.’  The crafting of the writing is is no way diminished by the non-Standard grammar, and the point that language is both an escape and a limitation, a method of free expression and a way to be labelled underlies every sentence.  I know that James can write wonderfully in Standard English, but I do hope he continues to explore aural expression in his works; each time I read them, I discover something new about language and about how I receive it. 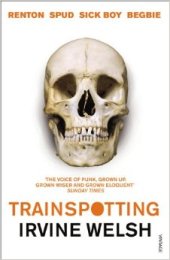 I haven’t written about him on the blog before, but I couldn’t complete this post without naming Irvine Welsh, possibly the first writer to really make me question quite how ‘English’ my English language reading was.  From the very first sentence of his most famous novel, readers have to recalibrate their inner ears, violently confronting prejudices about how words should be written; just try reading the first paragraph out loud – ‘The sweat wis lashing oafay Sick Boy; he wis trembling.  Ah wis just sitting thair, focusing oan the telly, tryin no tae notice the cunt.  He wis bringing me doon.  Ah traid tea keep ma attention oan the Jean-Claude Van Damme video.’  I genuinely think this was the first time I was faced with the politics of standardised spelling, the idea that, while UK spellings may not reflect the way that I, a Londoner, speak, my accent is recognised as ‘correct’ pronunciation.  Like so many readers before me, I had to accept that the main characters in a book did not speak the way I did in my head, and that I would have to adjust my own dialect to fit in.  How much I’d really want to fit in with the main characters in ‘Trainspotting’ is not the point.  Instead, I was struck by the artistry of an author who could make me mentally assume a different accent for the duration of the reading experience (and, embarrassingly, slightly longer).  It was a shocking reminder of the power an author has to force their readers to literally think in a different way, if they have the skill and integrity to pull it off. 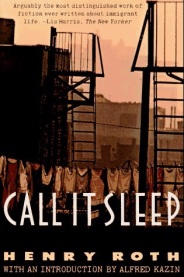 A book I have raved about on the blog before is Henry Roth’s ‘Call it Sleep.’  Last summer, as I went nuts for New York fiction, I was delighted to  reacquaint myself with this unjustifiably obscure classic.  You can see my full review here, but for now I’m going to be a bit lazy and copy out the relevant passages, because one of the joys of this wonderful novel is its use of language to explore the immigrant experience.  The main characters, David and his family, come from Eastern Europe; their first language is Yiddish and, when speaking it, they are fluent, polished and erudite.  The vocabulary is complex and the syntax sophisticated.  In contrast, when anyone in the book speaks in English, accent and grammar are faithfully written out, giving a wonderful presentation of the cocophany of accents in the Lower East Side of Manhattan.  It’s also a brilliant subversion of immigrant stereotypes, contrasting their rich ‘old world’ culture with the brash new sounds of New York.  If you’re interested in reading an enduringly relevant presentation of how spoken Standard English can be a barrier to clear communication, seek out a copy of ‘Call it Sleep;’ you won’t be disappointed.

Another New York read, was ‘Last Exit to Brooklyn’ (reviewed in full here).  Once again, this is a book that meticulously works with oral speech patterns to present a language that you can believe you have heard, even if you never expected to see it written down.  In the first story ‘Another Day Another Dollar,’  the scene is clearly set: ‘They sprawled along the counter and on the chairs.  Another night.  Anther drag of a night in the Greeks, a beatup all night diner near the Brooklyn Armybase.  Once in a while a doggie or seaman came in for a hamburger and played the jukebox.  But they usually played some goddam hillbilly record.  They tried to get the Greek to take those records off, but hed tell them no.  They come in and spend money.  You sit all night and buy notting.  Are yakiddin me Alex? Ya could retire on the money we spend in here.  Scatah.  You dont pay my carfare…‘  Apparently Selby didn’t use the apostrophe key because it interrupted his typing rhythm, but that doesn’t feel like an irritating affectation.  Instead, the lack of punctuation and the simple vocabulary echo the sterility and monotony of the lives depicted.  It suddenly seems that it would be inauthentic to present these characters in educated, complex language, such a style would bely the relationships and the violence of the world they create for themselves.  In the Brooklyn of the novel, some rules can be broken and others are unspoken but pervasive, Selby’s constricted but flowing language echoes his characters’ relationship to each other and to the outside world.  It was a wonderful reading experience, and his other novels are very high up on my reading wish-list.

I want to be clear, the reason these books work is because they are carefully crafted.  Writing in non-Standard English is a difficult skill, similar to an actor convincingly inhabiting a role which requires a specific accent (in comparison with someone just putting on a silly voice).  It is a powerful tool for exploring identity and power, education and domination.  My four top authors have each used it differently, telling a specific story and evoking a precise place and time.  Which other skilled writers should I look out for?  And does anyone have any ideas about how to appreciate the importance of such variations in language when reading in translation?  I firmly believe that all book lists can be extended, and I can’t wait to get to work on expanding this one.

11 Responses to It’s not what you say, it’s the way that you say it.