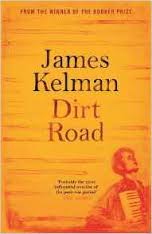 I know that for some readers, a new book by James Kelman is an event.  Personally, I’m feeling like a late-comer to the party.  This is my first Kelman novel, so I approached it with no built-up expectations of his writing style or concerns.  To be honest, all I knew was that Kelman has made his name as a proudly Scottish author, writing ‘How Late It Was, How Late’ in local dialect and making news last year with his claim that ‘London publishers are elitist and don’t get Scotland.’  I do feel that it’s a shame my introduction to his work is with a novel mostly set in the US, but I suppose I’ve no one to blame for this but myself.

There’s little gentle lead-in with his latest novel; ‘Dirt Road,’ begins with no real introduction to characters or setting.  Murdo and his father get up early in the morning, go through the house to check the electricity, gas, water and windows and then head off to the ferry terminal.  They are going to America.  Until we realise that Murdo has forgotten his mobile phone there’s no indication that this story is contemporary, as far as the landscape and details go it could be set any time in the last decades.  Murdo himself is equally vague, when asked by a schoolmate how long the American trip will take the answer is imprecise:
‘Two weeks I think.
Ye think!
Well maybe it’s two and a half’

The reason for this vagueness is the key to the novel’s slow tentative pace and unexpectedly enthralling unfolding.  We know that it’s just Murdo and his father making this journey, the perfect set up for a male bonding experience, but neither character is happy with this isolated, masculine existence.  ‘When Murdo thought of ‘his family’ … the family was four and not just him and Dad.  Mum died of cancer at the end of spring.  This followed the death of Eilidh, his sister, five years earlier from the same disease … The cancer his mother and sister suffered struck through the female line and ended in death.  Males cannot help.  All they can do is be there and supportive.  What else? Nothing, there is nothing.’  Murdo’s father escapes into his books, reading throughout their journey and stay with American relations.  Murdo knows there is an escape from the numb misery of his situation, but it is going to require a more complex solution than his father’s portable paperbacks.

Murdo only really comes alive with music; his passion and talent are enthralling.  While the story of ‘Dirt Road’ is ridiculously simple (will Murdo manage to travel to a music festival and take his place on stage with the legendary Monzee-ay?) the narrative is anything but.  ‘Dirt Road’ is one of the most powerful presentations of the mourning process that I have read in a long time.  It is a book of love and loss, of talent, family and of really great tunes.  It’s a reminder that some stories cannot be told quickly and some journeys will not be rushed.  Frequently slow and often painful, ‘Dirt Road’ is highly recommended reading and a reminder to seek out more Kelman books in the future.

I received my copy of ‘Dirt Road’ from the publisher via Netgalley, in exchange for an honest review.

Like Loading...
This entry was posted in James Kelman and tagged book review, Dirt Road, James Kelman. Bookmark the permalink.