Posted on December 11, 2016 by shoshibookblog 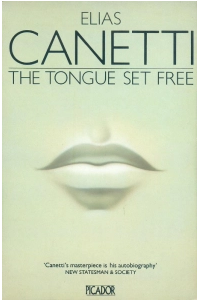 I love Elias Canetti because of his demented 1935 novel ‘Auto da Fé,’ so finally reading his memoir seemed an appropriate finale to my 2016 non-fiction project.  I had previously known absolutely nothing about this Nobel literature laureate’s real life.  With the Jewish pimp/chess champion Fischerle in Auto da Fé (a hump-backed dwarf who is at least as grotesque as any other character in the novel), I’d more or less assumed Canetti was anti-Semitic.  He was writing in 1930s Austria so it wasn’t that unlikely.  Then I found out he was Jewish, adding a whole new level of oddness to the novel and another reason to wonder about his life.

‘The Tongue Set Free’ tells of Canetti’s early years, living in Bulgaria, England, Vienna and Zurich.  His family’s peregrinations reflect their cosmopolitan outlook.  Sephardim, descendants of the Jews expelled from Spain during the inquisition, they are strongly aware of their roots and culture.  This culture is not based in a specific country or in religious practices however, but rather in an intellectual identity.  Wherever they lived, Canetti’s family were always at home within their self-defined, exclusive, intellectual clique.  Canetti describes an early memory of walking home with another student:

‘A boy … scornfully shouted at us ‘Yids!’  I didn’t know what that meant. ‘You don’t know?’ said Kornfeld; he heard it all the time, perhaps because of his conspicuous way of walking.  I had never been yelled at as a Jew – either in Bulgaria or in England.  I told Mother about it, and she waved it off in her arrogant way:  ‘That was meant for Kornfelt.  Not for you.”  It wasn’t that she wanted to comfort me.  She simply didn’t accept the insult.  For her, we were something better, namely Sephardim.’

Canetti’s mother, her convictions, obsessions and neuroses dominate the memoir.  Beautiful, passionate, opinionated and proud, she had highly specific standards for her eldest son and was indomitable in enforcing them, whether in person or through letters when she was spending time receiving treatments for her undefined health complaints.  Through the book, we learn a lot about her highly-strung approach to life and also how this impacts on her son.  Many episodes make for uncomfortable and claustrophobic reading, but others seem like they could have been taken straight from my favourite Zweig novellas, especially the times in hotels when young Canetti jealously watches the progress doctor friends make in his mother’s affections.

‘The Tongue Set Free’ has not supplanted ‘Auto Da Fé’ as my favourite of Canetti’s book, but it is a great companion to my collection of Zweig stories.  Overall, it’s been an interesting and thought-provoking conclusion a highly enjoyable reading project.  At the end of 2015, I pledged to review more non-fiction on the blog.  I am proud to report success above my initial target: after starting the year with a list of seven biographies to read, I have managed to expand this into a monthly non-fiction review!  Books covered so far have been:

January: Lost in Translation by Eva Hoffman
February: Carrying the Fire by Michael Collins
March: Persepolis by Marjane Satrapi
April: The Adventures of Mary Seacole in Many Lands by Mary Seacole
May: Memories: From Moscow to the Black Sea and Rasputin and Other Ironies by Teffi
June: The History of My Life by Giacomo Casanova (reviewed in July)
July: Wild Swans by Jung Chang
August: The Letters of Abelard and Heloise
September: Cockroaches by Scholastique Mukasonga
October: Letters Written in Sweden, Norway and Denmark by Mary Wollstonecraft
November: The Power Broker: Robert Moses and the Fall of New York by Robert A Caro
December: ‘The Tongue Set Free’ by Elias Canetti

Once again, blogging has been a wonderful way to work through a mass of books-I-mean-to-read-at-some-point.  Thank you to everyone for your encouragement and suggestions along the way!  My next question, of course, is which non-fiction books I should try to add to the pile for my 2017 reading?

11 Responses to A real-life Zweig novella: ‘The Tongue Set Free’ by Elias Canetti