One of the Best Books You’ve Never Read: ‘The Authentic Death of Hendry Jones’ by Charles Neider

Posted on March 2, 2017 by shoshibookblog 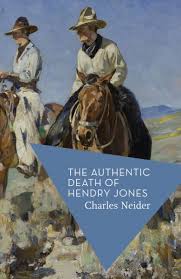 Last year Apollo books published 8 novels in their provocatively titled list ‘The Best Books You’ve Never Read.’  I felt utterly shamed by the collected novels; they were right, I’d read none of them.  The gauntlet had been thrown down, and what better place to pick it up than with the gunslinging antics of ‘The Kid’ – Charles Neider’s love letter to the Wild West.

It all felt like very new territory for me.  Not only had I never heard of Neider (though I was very excited to see him compared with fellow Odessan Isaac Babel on the blurb), I have read very few cowboy novels.  It may be that the fluent sparse language and wonderful character names are typical to the genre; the combination of daring machismo and jaded fatigue might be overly familiar to lovers of Western.  Personally, I was completely won over, both by the charismatic Hendry (aka ‘the Kid’) and by our matter of fact narrator, Doc Baker.

Doc was with the Kid during the final showdown and has decided it’s time to set the story straight.  From the men he shot, the woman he loved and the land he couldn’t leave, Doc promises the whole story of his friend’s death.  Along the way, we not only get to know the charismatic Kid, but also the untamed land he roams:

‘You must remember that in those times things weren’t all figured out the way they are now.  There were times for example when a rustler was not a rustler, but a fellow who made a living rounding up unbranded strays and who was a good and necessary hand in the business – until somebody got it into his head that it didn’t pay to have him around any more and passed a law and armed a lot of men and went sneaking around looking for branding irons that it was death from then on to have on you.  But I will admit that once you became one you were likely to continue being one.  And why not? Who wants to be fenced in if you don’t have to be? There was plenty of stray beef around, and plenty of loose money and land, and women for the asking.  So that in a nutshell is the story of our turning outlaw and if it makes you unhappy why write me a letter and I’ll see what I can do about it for you.’

For much of the novel, the Kid is indeed fenced in (locked in a jail, awaiting a death sentence), and his response is as unflustered as Doc’s narration.  Of course, the reader knows from the first page that Kid is never going die following a straightforward execution.  Doc still builds up the suspense though, greatly assisted by his hero’s fatalistic indifference to the odds stacked against him.

As you can tell, I thoroughly enjoyed ‘The Authentic Death of Hendry Jones.’  It has got me interested in reading more literature of the Wild West and made me even keener to seek out Apollo’s other great titles.

‘Bosnian Chronicle’ by Iva Andrić
‘Now in November’ by Josephine Johnson
‘The Lost Europeans’ by Emanuel Litvinoff
‘The Day of Judgement’ by Salvatore Satta
‘My Son, My Son’ by Howard Spring
‘The Man Who Loved Children’ by Christina Stead
‘Delta Wedding’ by Eudora Welty
And, of course, ‘The Authentic Death of Hendry Jones’ by Charles Neider.

Like Loading...
This entry was posted in Charles Neider, Reading America and tagged book review, Charles Neider, The Authentic Death of Hendry Jones. Bookmark the permalink.

10 Responses to One of the Best Books You’ve Never Read: ‘The Authentic Death of Hendry Jones’ by Charles Neider