Getting started with the Man Booker International Shortlist: ‘Judas’ by Amos Oz

Posted on June 4, 2017 by shoshibookblog 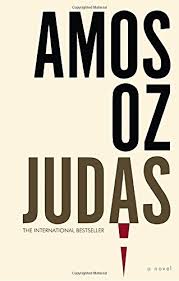 Then he went out into the street, which was bathed in a pleasant winter light, a light of pine trees and stones.  He was suddenly assailed by a strange, sharp feeling that anything was possible, that what was lost only seemed to be lost, but that in fact nothing was completely lost and what would happen depended only on his audacity.  He decided to change there and then.  To change his whole life from that moment on.  Henceforth he would be calm and bold, a man who knew what he wanted and did everything in his power to achieve it, with no holding back and hesitation.

The above quotation comes roughly one third through ‘Judas,’ and the ‘he‘ in question is the diffident Shmuel.  The passage grabbed me when I read it, not only because of the beauty of the language but because of the power and irony of the sentiments.  Shmuel is not a man of action.  He starts the book a person things happen to (girlfriend leaving, parents losing their money and so becoming unable to support him through his studies) and when he has the above epiphany it’s hard to know if Oz is laughing at the reader.  Are we expected to believe that Shmuel will finally act out of character, actually realise ‘what he wanted‘ and make genuine steps towards achieving it?  Or is this one more mini-crisis in an already settled life, like Oblomov’s plans to get out of bed or my own optimistic spurts of gym membership?

Main character aside, the novel’s title reminds us that individuals can have epic importance on the course of history.  Shmuel’s research, in and out of university, is about Jesus and Judas, focusing heavily on their personalities and biographies; he’s not Christian, but is fascinated by the ideas of love, brotherhood, friendship and betrayal conveyed by these teaching and stories.  Thus, while aimlessly wandering round the divided city of Jerusalem (the book is set in the winter of 1959-60) Shmuel is able to bring a significant but very unusual perspective to the decade-old country in which he lives.  The State of Israel was founded in 1948 and much of the novel takes place in the grief-filled house once inhabited by the only member of the Zionist executive committee to oppose the creation of the State.  Oz’s fictional Shealtiel Abravanel believed that Jews and Arabs should live in peace in a country under international control.  There are clear parallels drawn between Abravanel and Judas and, while no easy answers are provided, the book painstakingly explores the idea of betrayal, belief and loyalty in uncomfortably personal detail.

It can be hard at times to see if ‘Judas’ is supposed to be a coming of age story, or a political, philosophical tract.  Shmuel included, all the characters are stuck in rigid repetitive routines which can be difficult to engage with, though their intense discussions are well worth reading.  With its complex ideas and sensitive view of humanity, this book will be welcomed by fans of Oz’s writing.  For newcomers, it is a good introduction to one of Israel’s most famous authors.

I received my copy of ‘Judas’ from the publisher via Netgalley, in exchange for an honest review.

11 Responses to Getting started with the Man Booker International Shortlist: ‘Judas’ by Amos Oz