Posted on June 8, 2017 by shoshibookblog 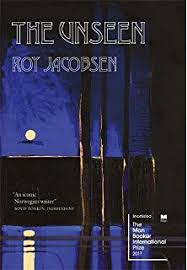 In January of this year, I had a wonderful time immersing myself in Nordic literature.  I was entranced by the isolation, the human endurance and the untameable environment.  Roy Jacobsen’s ‘The Unseen’ felt like a glorious return to so much of what I loved about these novels from the far north.

The book is set in a remote collection of islands off the coast of Norway.  We are introduced to them in the company of a seasick priest on his first visit to ‘the fisherman-cum-farmer Hans Barrøy, the island’s rightful owner and head of its sole family’.  What strikes the priest most is the unexpected view of the mainland, which he ‘has never seen before from such a novel vantage point … [he] stands admiring the whitewashed church that emerges and looks like a faded postage stamp beneath the black mountains where a few remaining patches of snow resemble teeth in a rotten mouth.‘

It’s a great introduction, but not really typical of the rest of the novel, in as much as the Barrøys spend very little time worrying about the mainland or appreciating their outsider perspectives.  Instead, they follow in the footsteps of the hard-working Bjartur from Laxness’s ‘Independent People,’ Hamsun’s sturdy colonisers in ‘Growth of the Soil‘ and the close-knit families depicted by Tove Jansson.  They are concerned with surviving in the here and now, living in an uneasy truce with the unforgiving weather and determined to make the most of whatever comes to hand.  Everything brought in by the tides is kept and put to use, while what the tides and storms blow away is scarcely mourned.

‘The Unseen’, with its enterprising and stoic characters, makes for charming reading.  It may not feel very new, partly because it falls so clearly within its literary tradition, partly because the prosaic, uncomplaining protagonists are reminiscent of last year’s Man Booker International short-lister ‘A Whole Life’ and partly because its use of dialect when characters speak is more Thomas Hardy than 21st century.  I suspect all of the above will form a part of its appeal for readers; personally, I’m always happy to hide in my room and curl up with book in which brave characters show integrity and strength when battling the forces around them.

I received my copy of ‘The Unseen’ from the publisher via Netgalley, in exchange for an honest review.

3 Responses to Revisiting Norway: ‘The Unseen by Roy Jacobsen