An Italian Classic ‘The Betrothed’ by Alessandro Manzoni 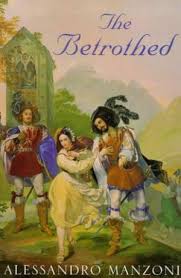 ‘The Betrothed’ starts with a cowardly cleric being threaten with unnamed reprisals if he performs a marriage ceremony for a peasant couple against the wishes of the evil Don Rodrigo.  The fearful priest resolves to obey these commands, cursing his misfortune at being caught between his religious duty (he has already promised to perform the wedding ceremony) and the inescapable power of the bullying baron.

Thus begins a epic story of tyranny and love. The peasant couple are of appropriately heroic stock – poor but honest, she is of surpassing beauty, modesty and virtue.  He is slightly more human, but equally impotent against the vicissitudes of fortune.  And what vicissitudes there are.  Apart from ‘bravos’, essentially gang enforcers roving the countryside unopposed, the book will cover blackmail, abduction, riots, war, famine and plague; it’s a historical novel that depicts the best of seventeenth century chaos through the refined lens of nineteenth century melodrama.

Most enjoyable from my perspective, were the moments when the book was most reminiscent of contemporary Gothic fiction.  ‘The Monk’ by Lewis was published in 1796 and Radcliffe’s ‘The Italian’ came out a year later.  I hope it’s not too much of a stretch to look for similarities between these enjoyable pieces of Gothic silliness and Manzoni’s Italian classic, first published in 1827.  I certainly got my  beautiful and virtuous heroine, my dastardly aristocratic villains and the decadence and corruption of religious orders (Diderot’s ‘The Nun’ was also published in 1796).  The fact that this book is Italian and so not written with a Protestant or secular world view added a twist to the familiar themes.  While hypocrites are under attack, the Catholic Church remains a force for good in the novel.  Indeed, when a key character makes a sacred oath to forsake marriage and take holy orders, none of my previous reading could prepare me for how the plot would deal with this potentially insurmountable barrier to a final happy ending.

As you can tell, I really enjoyed the story and characters in ‘The Betrothed.’  All that prevents me from wholeheartedly recommending it to others is the thorny issue of translation.  I alternated between a heavy paperback edition of the book (trans by Archibald Colquhoun) and a weird Kindle version from project Gutenberg (which claims to be written by a Count O’Mahony).  I can’t imagine either do justice to the Italian original and only hope one of the many wonderful publishers currently specialising in literature in translation will be bringing out a more readable English edition of this classic soon.  If anyone has read a good translation please do let me know, in its absence I’m going to work on remembering the exaggerated events of the novel while trying to forget the distorted sentences of the translations.

7 Responses to An Italian Classic ‘The Betrothed’ by Alessandro Manzoni