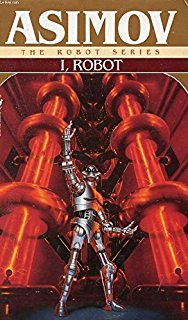 As the recent silence on my blog demonstrates, I’ve been suffering from something of a reading slump.  As all experienced readers know, the only way to combat such misery is to wait it out, holding on to the hope that the perfect choice of books will suddenly rekindle the old magic.  Thanks to a judicious mixture of non-fiction, genre reading and staring into space, things are slowly getting back to normal and I’m going to celebrate by reviewing a book has been staring at me reproachfully for weeks, waiting for me to spread the word.

Asimov’s ‘I Robot’ is a series of short stories, which, taken together, provide a ‘history’ of robots from the early stages of their development to an imaginatively realised robot-controlled future.  Given that a certain amount of my day job involves computers (including a real world engagement with what developments artificial intelligence might bring) it was delightful to immerse myself in Asimov’s twentieth-century presentation of the future of technology.

The robots in the book are exactly what you see on the cover, humanoid, gesticulating and emoting beings who are best understood by our ‘robopsychologist’ narrator.  The set-up is beautiful in its simplicity; at the heart of robopsychology, and of each story, lie the famous three laws:

The drama in the stories comes from seeing how robots, and humans, navigate these rules.  The additional bonus for 21st century readers is that we can always replace the word ‘robot’ with the word iphone and so turn futuristic sci-fi into attractive nostalgia.  Even the most dystopian and most forward-looking story somehow brings a measure of comfort to anyone concerned about the place of technology in our own world. Reading ‘A Dance to the Music of Time’ during the last year has allowed me to escape into past, but ‘I Robot’ goes one better with it’s ability to transport the reader to a version of the future as imagined by the visionaries of the previous century.  It also contains a drunk robot singing Gilbert and Sullivan while trundling round in circles, and I’m not sure classic science fiction gets much better than that!

Like Loading...
This entry was posted in Asimov, Science Fiction and tagged Asimov, book review, I Robot. Bookmark the permalink.

4 Responses to Classic Science Fiction: ‘I Robot’ by Asimov