Posted on December 9, 2018 by shoshibookblog 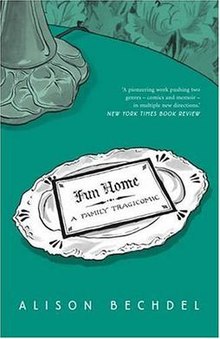 Before reading ‘Fun Home,’ I only knew of Alison Bechdel from The Bechdel Test.  Then I saw that there was a musical based on her memoir ‘Fun Home’ and heard that it was about her father coming out as gay.

None of this prepared me for the virtuosity of Bechdel’s debut.  I don’t want to write too much about the plot, because it contains a couple of jaw-dropping reveals quite early on and I would hate to spoil them for anyone.  Instead I’ll focus on the second breath-taking aspect of the book, the barrage of literary allusions that bring an intellectual joy to the most traumatic of subject matters.

Take the opening page in which we see a snapshot of happiness, the young Kate playing ‘airplane’ with her father, balancing, arms outstretched, on his feet as he lies on the floor.  It would take a better art critic than me to do justice to the drawing skill shown in the simple figures, but I feel perfectly placed to relish the accompanying prose: ‘It was a discomfort well worth the rare physical contact, and certainly worth the moment of perfect balance when I soared above him.‘  An accompanying text box tells us that in circus acrobatics such balancings are called Icarian Games.  In an example of the dead-pan timing displayed throughout the book, it’s not until you turn the page that that you see the collapse, the caption reading ‘considering the fate of Icarus after he flaunted his father’s advice and flew so close to the sun his wings melted, perhaps some dark humour is intended.‘ An eye-flick later you read the poignant reflection, ‘In our particular reenactment of this mythic relationship, it was not me but my father who was to plummet from the sky.‘

I should also mention a small detail in the first panel; at the start of the game, we see Kate’s father’s hand keeping his place in a book, even as his daughter positions herself on his feet.  The book’s title is Anna Karenina and, without going into too much detail of exactly how much tragedy this foreshadows, I also felt it gave me permission to step away from the family drama depicted in ‘Fun Home’ whenever I fancied, to focus instead on the wealth of literary gems self-consciously lurking on and beneath the surface.

Each chapter looks at a literary great, moving from the Classics of the beginning, through Camus, Wilde and a host of canonical American figures.  Possibly my favourite was Chapter 4: ‘In the shadow of young girls in flower,’ built around Proust’s ‘In Search of Lost Time,’ which Bechdel’s father started reading the year before he died.  It starts with a long quotation about lilacs blossoming, followed by over a page describing how flowers appear in ‘Swans Way’ (the first volume of ‘Lost Time’).  All this serves to caption illustrations of Bechdel’s dad cultivating the family garden.  The final panel of the section reads: ‘If there was ever a bigger pansy than my father, it was Marcel Proust.’

If this all sounds a bit cerebral, it’s because I’ve underplayed the incredibly sensitive handling of grief.  The book begins by showing how metaphors and literature are a way of understanding relationships.  It goes on to argue forcefully that, in the absence of answers, looking to books for explanations can be an important stage in understanding each other and ourselves.  Bechdel begins by accusing her father of living through literature and fictions, but her own book is a knowing example of how these tools for coping have also become central to her personal ways of processing the trauma of his death.  In its form and structure, the whole book is as beautifully complex and balanced as the very first pages and, as in those pages, the reader is reminded again and again that they are in completely safe hands.