‘Absent Place – An April Day’: My Dickinson poem of the month

Posted on April 3, 2019 by shoshibookblog 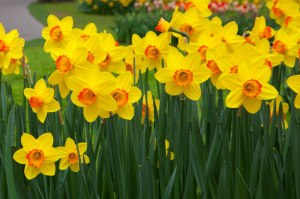 I love April and I love daffodils, but I have often struggled with poems that only focus on the sublime or pretty aspects of spring without allowing space for the season to be difficult.  This feels especially true at the moment.  A few years ago my April poem of the month was Robert Browning’s ‘Home Thoughts from Abroad.’  Even if you’re not familiar with the whole poem, you may know the first lines: ‘Oh to be in England, now that April’s there.’  Given how fraught England currently is, it just doesn’t seem appropriate.

Instead, my 2019 April poem is by a very different poet, writing about very different emotions.  Emily Dickinson’s poem is not about comfortable belonging, but about impermanence and illusion.

As with my favourite Dickinson poems, I don’t read it in search of full understanding or meaning.  It’s not about a coherent narrative, that’s what prose is for, instead her lyric poems convey emotions through beautifully crafted, often unexpected, images and symbols.

We begin with the idea of an absent place which is contrasted with, or shown to be the same as, an April day.  It’s not clear if this is an absent place in space or time, but this sense of something lacking will haunt the short poem, full though it is with evocative images.  We are then presented with daffodils, then snow, then daffodils again, the daffodils always plural, the snow at the heart of the poem, a deep blocking weight.

Again, it may be something about where I am at the moment, but I love the chill at the centre of this poem as much as I love the ‘delightful’ image of daffodils around it.  Daffodils (Latin name ‘Narcissus pseudonarcissus’) are the eponymous flowers in the myth of Narcissus, who fell in love with his own reflection and was turned into the flower that bears his name, always turning down to stare into water.  This gives a cool terror to the idea of duplication which closes the poem.  The myth of Narcussus is all about a shallow appreciation of surfaces rather than depth, bringing us back to the idea of absence in the opening words.

As I said at the start of this post, I really do love April and its most famous flowers.  I also however love the way Dickinson invites us to step back and look beneath the surface, for the challenges and also the seductive attraction beneath the confusing changeability of the season

2 Responses to ‘Absent Place – An April Day’: My Dickinson poem of the month