What is seen and what is missed: ‘Closely Watched Trains’ by Bohumil Hrabal 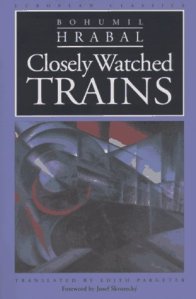 It’s hard to talk about Bohumil Hrabal’s books – partly of course, this is due to an English lack of confidence with pronouncing his name, but it’s also because they are just so disjointed and odd, with clear, catchy titles belying their opaque and bewildering narratives.  In the past few years I’ve read ‘I Served the King of England’ and ‘Closely Observed Trains’ both short novels and yet both so full of tangents, tone changes and what feel like Czech in-jokes I’ve never felt able to review them.

This week is the #1965 club though (hosted by Kaggsy’s Bookish Ramblings and Simon at Stuck in a Book), and Hrabal’s novella ‘Closely Observed Trains’ fits the brief.  It seems finally time to put my impressions in some kind of order and attempt to structure a post about a book whose style continually contradicts and subverts the mechanical and regimented promise of its title.

‘Closely Observed Trains’ opens in 1945; the Nazis have lost command of the air-space over the narrator’s town, but continue to control the rail-lines, keeping them in ‘close surveillance’ to guard against delays and sabotage.  This sounds like it should be a job for Hašek’s ‘Good Soldier Švejk,’ whose good-humoured willingness to follow orders wreaked havoc with the Austro-Hungarian army’s efforts in the first world war.  Hrabal’s novella however is less pointed and more complex than Hašek’s earlier Czech classic of passive resistance.  While those around the narrator are profiteering from the situation (opportunistically removing the accents from their names to fit in with the Germans, using metal from shot-down Nazi planes to make roofs for rabbit hutches) poor innocent Miloš is less able to keep up with the confusing world in which he lives.

His confusion is passed on to the reader through Hrabal’s pabeni writing style – a form of stream of consciousness in which anecdotes flow without necessarily ever ending or showing why the narrator happened to think of them at any specific time.  For example, we learn a lot about his father and grandfather’s eccentricities, before hints start to appear about Miloš’s own life.  It’s a short book and I don’t want to spoil the plot, but young Miloš is a junior railway worker whose personal struggles with adolescence seem to echo the national feelings of impotence and frustration of his historic moment.  At times he attempts to take drastic measures against this state of affairs, and these tragic moments of agency frame the narrative.  Ultimately, even the clearest cut actions become mired in black humour and conflicting agendas; poor Miloš does not seem to understand either himself or those around him, and this disorientation is passed straight on to the reader.

I can’t say that writing about the novella has helped me understand it, but it has helped me appreciate its craft and ambition.  The fact that a novella about train schedules can be so unreliable, directionless and generally unstable is in itself both charming and audacious, two adjectives highly appropriate to Hrabal’s writings.  For a book about undermining authority it succeeds on every level, including the authority we usually expect from an author or narrator and the security that comes from knowing where you are in their story.  Hrabal won’t deliver these, but he will give you a breathtakingly accomplished vision of trauma and resistance, well worth discussing despite being impossible to describe clearly.

Note: I’ve illustrated the post with the wonderful European Classics edition of the novella, even though I actually read the Abacus edition (trans. by Jiří Menzel).  It was a purely subjective choice – I just prefer this image – even though I realise my referring to the book as ‘Closely Observed Trains’ (Abacus’s title) rather than the alternative ‘Closely Watched Trains’ (European Classics title) could cause confusion.  Trust me, this is nothing compared with the potential for misunderstanding within the book itself.

Like Loading...
This entry was posted in Bohumil Hrabal and tagged Bohumil Hrabal, Closely Watched Trains, The Good Soldier Svejk. Bookmark the permalink.

10 Responses to What is seen and what is missed: ‘Closely Watched Trains’ by Bohumil Hrabal