Finding the monster ‘Frankenstein in Baghdad’ by Ahmed Saadawi 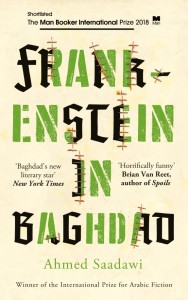 Mary’s Shelly’s ‘Frankenstein‘ tells of a monster created by a hubristic scientist out of scavenged, beautiful body parts in a doomed attempt to demonstrate human ingenuity.  The result was an abomination who has nonetheless gone on to capture the hearts of readers for over two centuries, revealing as he does his own tortured humanity in contrast to his apparently admirable and ambitious creator.

From Boris Karloff to Tim Burton, new generations have interpreted the monster for their own times, but it’s hard to find a more accomplished recreation than Saadawi’s utterly up-to-date Iraqi re-telling, in which the figure haunting Baghdad is said to be made up from body parts recovered after bomb blasts, and brought to life by a multicultural city’s collective wish for humanity, national cohesion and revenge.

As with Shelley’s novel, ‘Frankenstein in Baghdad’ exists in a world that straddles the scientific and the supernatural.  The beginning is laugh out loud funny, taking the form of a ‘final report’ about the work of the ‘Tracking and Pursuit’ department (‘partially affiliated to the civil administration of the international coalition forces in Iraq‘).  It seems the department had been a) employing astrologers and fortune tellers on high salaries to identify security threats b) leaking documents relating to these activities to ‘the author.’  It’s a set up that promises joy to any lover of gothic literature, not least the assured blending of fact and reality that frames so many classics of the genre.

Saadawi’s novel does not confine itself to gothic tradition however, instead it updates it.  The thrill of the book is not horror (though there is a lot of that, the first chapter after the ‘final report’ opens with a bomb going off in the middle of busy civilians trying to go about their weekly routines in the centre of Baghdad).  Instead its power comes from the balancing of the absurd with the tragic, the humour of daily life and the power of politics, religion and love that infuses it all.  There is an action story inside there, and also the heart-braking narrative of a lonely woman coming to terms with her son’s death.  Both are given appropriate and equal weighting in a book which updates the complexity of the best of classical Gothic novels with the modern and all-to-real issues of a specific city in the 21st century.

I learned about ‘Frankenstein in Baghdad’ when it was shortlisted for the Mann Booker International Prize last year and I feel it is a testament to the importance of such awards.  Translated brilliantly by Jonathan Wright, it made me laugh and came very close to making me cry through its sensitive yet outrageous exploration of life surrounded by death.  If you want to understand Mary Shelley’s ‘Frankenstein,’ read ‘Frankenstein in Baghdad.’  And if you want to understand what the best of current fiction looks like, follow my example and hope for more books by Saadawi to become available in English soon.

For a far more insightful interpretation of the story – you can read an interview with the author here.