‘The Castle of Otranto’ by Horace Walpole 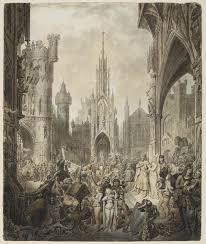 The Castle of Otranto is great because it’s such a literary quirk.  If it hadn’t caught everyone’s attention at the time, it’s really hard to imagine it still being published today, but the fact is it was just too influential to overlook.  It’s scary to think that if this book hadn’t been written, we might not have ‘Rebecca’ or ‘Gormenghast’.  I know I’m not selling it properly, but I just can’t take it seriously and tend to read it with a look of disbelief on my face.

The best bits about ‘The Castle’ are those which are the most like Monty Python.  I really like the giant helmet that falls out of the ceiling and crushes people and I find the inexplicable disappearing/reappearing giant hand more memorable than any of the characters or the plot. 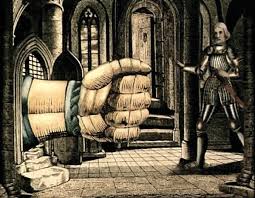 The other important thing about ‘The Castle’ is its use of escapism to avoid reality.  It’s set in some random medieval-ish time period in a foreign country.  There appears to be no kind of legal or civil code, people murder and lock each other up at will, and this makes sense because, well, people behaved strangely abroad/back then.  Given that this book was published at the start of the Industrial Revolution it is tempting to speculate about the huge appeal of a ‘simpler’ time for Walpole and for his readers.  A nonsensical story about people falling in love, finding long-lost children, and committing the odd murder seems like an excellent way to deal with the dawning of a frightening new era, so maybe there’s still a lot to learn from this first Gothic novel.