In Search of Lost Time, by Marcel Proust

I started reading this on my Kindle, and honestly had no real idea of how long it actually was.  I really really recommend you read ‘In Search of Lost Time’ in discrete novels, that is how it was originally published, how it was written and also the best way of keeping pace.

Hints to help you read

1. Be aware that if characters are important, they will re-appear.  Proust is exploring the idea of unreliable memories so I recommend you do what I did and apply this to your own reading style.  The books should wash over you, if a thing is worth saying, he will repeat it, so don’t worry if you find yourself forgetting details.  Also, as perception can be as unreliable as memory, characters will change as you learn more about them.  It wasn’t that you got it wrong the first time – the mistake was the narrator’s, not yours.

2. A book about memory has to have links to psychology and ‘Proustian memory’ or ‘The Proust phenomenon’ is apparently a real thing and describes the evocation of sensory based memories from childhood.  I was fully prepared for the famous madeline scene where the narrator is emotionally and sensually transported back in time after eating a biscuit.  What I hadn’t realised is that Proust apparently also appeared to experience a whole range of cross-over sensory perceptions.  Synesthesia is a neurological condition in which one or more sensory modalities become linked, for example, people who can see sounds, or taste colours.  Proust doesn’t appear on Google’s lists of famous people with synethesia, but once I remembered the conditions it makes passages like the following extract from ‘Swann’s Way’ so much more comprehensible; I’m sticking with my completely non-medical diagnosis, until I learn better.

But names present to us—of persons and of towns which they accustom us to regard as individual, as unique, like persons—a confused picture, which draws from the names, from the brightness or darkness of their sound, the colour in which it is uniformly painted, like one of those posters, entirely blue or entirely red, in which, on account of the limitations imposed by the process used in their reproduction, or by a whim on the designer’s part, are blue or red not only the sky and the sea, but the ships and the church and the people in the streets. The name of Parma, one of the towns that I most longed to visit, after reading the Chartreuse, seeming to me compact and glossy, violet-tinted, soft, if anyone were to speak of such or such a house in Parma, in which I should be lodged, he would give me the pleasure of thinking that I was to inhabit a dwelling that was compact and glossy, violet-tinted, soft, and that bore no relation to the houses in any other town in Italy, since I could imagine it only by the aid of that heavy syllable of the name of Parma, in which no breath of air stirred, and of all that I had made it assume of Stendhalian sweetness and the reflected hue of violets.

3. As with many ‘most famous’ moments in literature (the windmills in ‘Don Quixote spring to mind), the bit with the madeleine is very near the beginning.  In fact it appears in ‘Swann’s Way’, making me wonder, cynically, if all the people who show off through referencing it have read past Vol. 1 of the complete novel.  The good news is that ‘Swann’s Way’ does stand alone so if you want to read it to see if Proust is your thing, you can enjoy a small slice of Proust, and know you’re also getting his most famous passages.  I do recommend you continue though.  The book is cumulative so my favourite volume is the last, but only because of what came before. 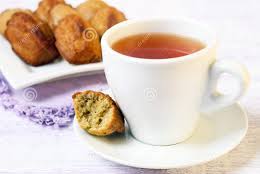 8 Responses to In Search of Lost Time, by Marcel Proust