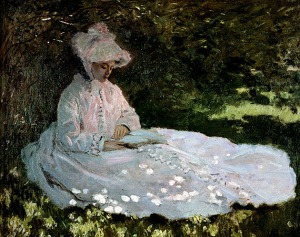 I’m all for immersive reading experiences and I can’t help thinking it would have been lovely to really read these books in context so that the images in my head matched up (historically) with what was originally being described.

For my sources here, I’m mostly going for Impressionists, because it seems appropriate (Zola was also an art critic who vigorously defended the Impressionists), but I haven’t wanted to limit myself because that would be a foolish thing to do with such a sprawling book sequence. 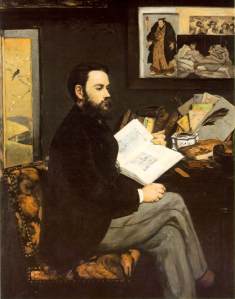 In the interests of gender equality, here’s a contemporary image of a book-loving man (Zola himself – painted by Manet and exhibited in 1868) 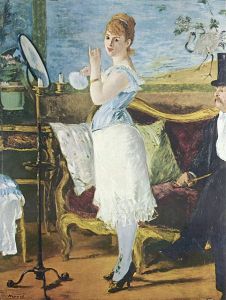 If you’re looking for a copy of Nana, of course you’ll want a good translation, but I recommend trying to find an edition with this picture on the cover.  It was painted by Manet in 1877 and was entitled Nana.  While it is true that this was a generic name for the kind of woman who would stand, dressed like this, in front of a staring well-dressed man, it was also painted after the publication of L’assomoir in which Nana Copeau first appears.  Anyway, I like to think of this as a picture of Nana and her clothes (some of them anyway).  It also shows you the wonderful 2nd Empire shoes and some idea of room furnishings if you want to picture them. 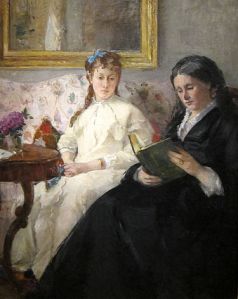 I do think the women here look a bit miserable, but they shouldn’t because they are reading (though probably  not racy books like Les Rougon Macquart).  It does give another view of female fashion in contrast to Nana above and also gives a view of a more fussy middle class interior space 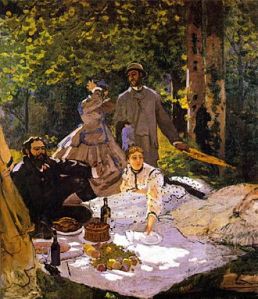 This is a more bohemian group, it’s of the artist’s friends, but it also shows another way of enjoying yourself and more wonderful clothes for men and women! 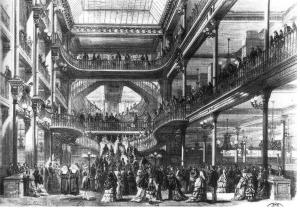 I realise that this is quite small, but it’s a picture of Le Bon Marché, the inspiration for Au Bonheur des Dames and, if you squint, you can see the bustling crowds buying the kinds of clothes pictured in all of the pictures above. 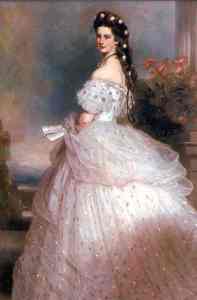 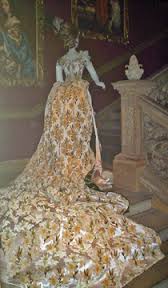 These are two dresses designed by Charles Frederick Worth (1825-1895), the English dressmaker who has been credited with creating haute couture (or at least with aggressively promoting himself as its creator).  Anyway, his Rougon Macquart alter ego is called Worms and has a pretty significant role in La Curée in which he helps drive Renée into debt and embodies the decadent waste of 2nd Empire France.

I realise that none if these illustrations are necessary to enjoy the books.  Zola can do everything necessary with words – that’s what makes him great.  Still, I do enjoy picturing the scene and I hope these images have helped.