Bely had not even appeared on my initial Russian reading list, then I saw a Penguin edition of Petersburg in the flagship Foyles book shop on Charing Cross Road.  I wasn’t sure whether to be thrilled at the thought of another city novel (I’m a Londoner through and through; I’ll read books set in the countryside, but I’m always most at home in the town), or to be slightly concerned by the length.  I haven’t loved the last two novels that I’ve read and another long book might just be putting off Zamyatin, and I can’t wait to re-read Zamyatin.

Things didn’t get any easier even once I started my research.  Apparently Petersburg is the Russian ‘Ulysses’, deep, textured and very difficult.  Now I do love Ulysses, but I’ve often wondered how I’d get on with it in translation.  I also know that my ability to feel comfortable with Joyce comes from my familiarity with his cultural heritage, would ‘Petersburg’ be a pretentious Modernist classic too far?

There is a lot to admire in the book, not least that it delivers exactly what you’d expect from a Symbolist classic.  Everything is about repeated images, the significance of straight lines as opposed to zigzags or curves and the emphatic use of colour throughout the novel are the two most striking examples of an experimental but very powerful story-telling method.  This means that a conventional plot (‘Fathers and Sons’ style conflict + assassination of high ranking officials) can gain epic scope, but it is also a highly self-conscious and artificial way of writing so I suppose everyone was right and we’re definitely in ‘Ulysses’ territory.

There are great moments in the book.  I was personally very excited to read about the young Nikolai Apollonovich running around Petersburg in a red domino (according to the notes, an explicit reference to Poe’s ‘Masque of the Red Death’).  In the style of Gogol or Sologub however, this becomes ridiculous rather than moving; it’s yet another example of the complex use of colour.  Red is the colour of blood and of the revolution, however it also represents adolescent romance and later we’re told ‘Apollon Apollonovich rushed like a bull at anything red (even a nose).’  I think if I’d found the writing as engaging as the play of symbols I would have loved this book, but somehow the prose lacked the fluidity of these motifs.  This could be translation, but, given the experimental style of the novel, it could just as easily be Bely himself. 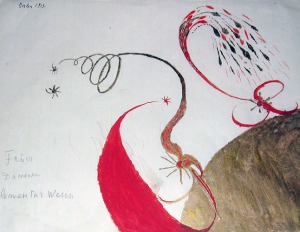 One of Bely’s own ‘meditative drawings’ from 1910, when he was writing the novel.

Overall, I think that Petersburg is a book to be discussed, rather than a book to read on your own.  It became a somewhat isolated reading experience because, really, it was crying out to be pulled apart and analysed in a way that I just could work my self up to alone.  This probably isn’t the heartiest of endorsements, but if anyone has read ‘Petersburg’ and has insights to share I’d really appreciate it.  It’s probably a book that should be re-read, but sadly it’s not just as appealing as ‘Oblomov’, ‘The Golgovlyov Family’ or Andreyev’s stories, all of which I loved the first time round.