Interview with a Vampire, by Anne Rice

This is another modern Gothic that I encountered on screen before reading the original book. 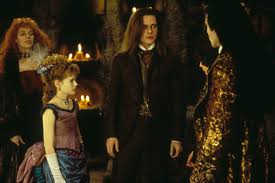 It contains everything you would want from a Gothic romp, decadent aristocrats, lush settings, homoeroticism, death and decay.  As befitting a twentieth century reinvention, the vampires are now the stars of the story.  This is not about beating the monsters, this is about being enticed by their glamour.

With all due respect to Anne Rice, I also feel like this is a return to Gothic’s original popular roots.  ‘Interview’ does deal with big themes about guilt, identity and death, but it’s also the kind of book you can read on the train without looking overly intellectual.  There is decadence and murder, all with a stylish historical twist, and packed into a very fast-paced read.

Also, it’s a great addition to the, usually much more highbrow, Southern Gothic genre, which is its own world of weirdness.  The story of ‘Interview’ is that Louis is telling his 200 year long life story to an young reporter.  The narrative starts in 1790s New Orleans (according to ‘The Simpson’s version of ‘A Streetcar Named Desire’: ‘the city that the damned call home’).  Louis was a plantation owner and, when he forms an alliance with the vampire Lestat, his slaves are the the first victims of the supernatural hunters.  The novel moves around various exotic European locations but its emotional home is always New Orleans, where life is cheap and horror is never far away.

It is possible to read ‘Interview’ as a deep metaphorical comment on the legacy of slavery and the traffic of human bodies.  It’s also very easy to read it as a well-written horror story for the 20th Century.

Also – this novel is, with hindsight, a good bridge between the adult/age shifting vampires of the 19th century and the Young Adult vampires of the Twilight age.  The main vampires in ‘Interview’ are in their age-less twenties, acted by teen heart-throbs Tom Cruise and Brad Pitt in the 1994 film.  As we all know, teenage vampires are going to do extremely well in the 21st century…

2 Responses to Interview with a Vampire, by Anne Rice